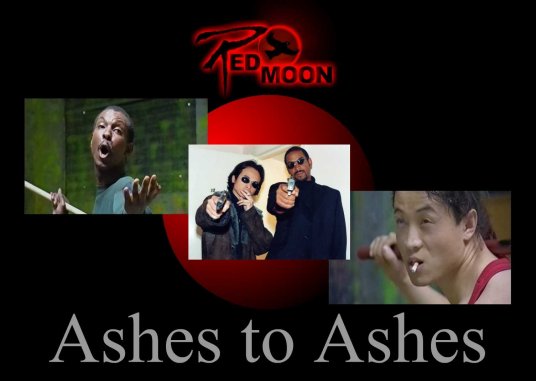 Ashes to Ashes is a raw, humorous action-thriller involving greed, betrayal, the Chinese Triads, martial arts, the Italian Mafia and male escorts.
>
No Wires, CGI, Stunt Doubles, Mats or Pads. Conceived in 1993, written in 1994 and released in 1999, Ashes to Ashes is
the first British kung-fu film.

Mr Antoniades played the role of 'Mafia Karate Expert' - bodyguard to an Italian Mafia Boss. He also choreographed several fight scenes employing the  Kenpo techniques 'Evading the Storm' and 'Flashing Mace'. Also featured in the film is a stick fight staged by Wu Shu Master and Hollywood stuntman Vincent Wong as well as several scenes featuring the use of Nunchakus by Wayne Gerard Trotman.

Viewers have asked if the Nunchaku (two-piece-rod) scenes have been sped up, the answer is emphatically "No" says writer and director Wayne Gerard Trotman: "In fact, some of the Nunchaku sequences could not be used in the final film as the sticks were not captured on camera. The camera records images at 24 frames per second; anything moving faster than 1/24th of a second becomes invisible. In a slow motion sequence kept in the film my hands and the stick could barely be seen. Audiences have grown accustomed to perfectly choreographed wire enhanced stunts where actors seemingly defy the basic laws of gravity.

In some films the fight scenes are shot with the actors moving very slowly then the sequences are sped up in the edit. This makes filming safer and the actors appear very graceful and competent as fighters, but the results are sometimes hard to believe. That's not the approach I wanted to take for Ashes to Ashes. I wanted something that looked authentic. To create a sense of real danger I insisted on real weapons. The stunts were worked out a few minutes before the take, actors wore no protective padding and we had no protective floor mats. The fighters we used knew what they were doing, what you see is the real deal."
For the award winning trailer and information regarding 'Ashes to Ashes' visit the official film site: Red Moon

To read reviews use the following link:

Ashes to Ashes was treated in a raw style inspired by films such as Return Of The Dragon. There is no CGI and the fighting is based on street fighting. It is not a display of perfectly staged fighting and the aim was to create a sense of realism. This prompted the use of real weapons and rehearsals were no more than 20 minutes for each fight sequence. It certainly kept everyone on their toes.  Wayne did the most dangerous stunts with the sword and various sticks. The next film to be released by Wayne will be a Sci-Fi movie but will have much more martial arts than Ashes to Ashes. This will be treated in more of a fantasy style with more emphasis on choreography. It is planned that Jason Ninh Cao, Vincent Wong and Athos Antoniades will return. They will be joined by Shaolin Martial Monks of China!

Wayne Trotman is a producer with awards for writing, photography, music, filmmaking, art & design. He has had brief formal training in Kung Fu, Tae Kwon Do and Karate but taught himself to use Nunchaku. Born in Trinidad and his fascination with martial arts films began in the early 70's. He would have to sneak into the cinema because in those days most of the movies were rated 18 yrs and over. He often would use eyebrow pencil to make it look like he had the beginnings of a moustache and speak in a deeper voice. Probably because he was quite tall this trick seemed to work. Growing up in Trinidad, he was a big fan of Bruce Lee, Jackie Chan and Hwang Jang Lee. Popular movies at the time were: Fists of Fury, The Chinese Connection, Return of the Dragon, Enter the Dragon, Game of Death, The Drunken Master, Snake in the Eagle's Shadow, Secret Rivals I & II, Heroes of the East, Invincible Armour and Warriors Two. This interest in Kung Fu was further fed by Marvel Comics: The Deadly Hands of Kung Fu and Iron Fist and TV series such as Kung Fu and The Green Hornet. There was also Carl Douglas's hit song: Kung Fu Fighting and Curtis Mayfield's Kung Fu. Martial Arts was and still is big in the West Indies.