Bruce Lee never bragged about his muscular body, but he was proud of it, especially of his highly developed abdominal muscles. When Bruce wore loose clothing, he looked like a normally built guy. But underneath the clothing, he was a man with extraordinary muscles.

"I've seen many muscular bodybuilders," one of his fans said, "but never like Bruce. He is built perfectly, not bulky. He has muscles on top of muscles, yet he moves with the finesse of a ballet dancer. Those men with bulky muscles can't move like that; they are too tight and clumsy."

Fred Weintraub, the producer of Enter The Dragon, gave this description of Bruce: "...His body never had an inch of fat; it was pure muscle, like steel."

Bruce had to work hard to develop those muscles. "l used to have a big, soft belly," he explained. "My stomach protruded and I looked terrible for a young guy. I decided to streamline my waist."

From that revelation, Bruce took up weight training. He was always a bundle of energy. He was like a small kid who would never tire. If he had his mind set to do something, nothing could have stopped him.

He combined weight training with his regular workout.

He spent as much as four hours in his garage, hardly taking a break, as he worked on the equipment, built by his students to his specifications. He designed his weight-training workout to avoid bulky muscles that might interfere with his performance. For instance, he did not want muscles that restricted the movement of his elbows. 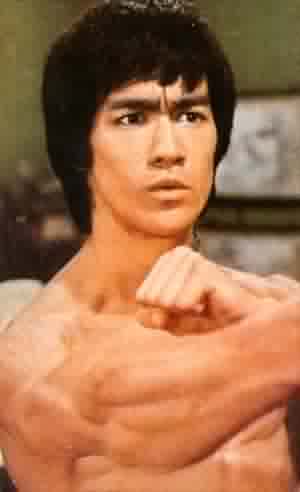 "You must tuck your elbows in quickly when a blow is directed to your midsection," he explained. "Some bodybuilders are so bulky that they have no way to defend the solar plexus area with efficiency. They can't cover the area with their elbows, so when they use another method to protect it, they leave other parts of their body open. Weight training is supposed to help you, not screw you.

Bruce concentrated heavily on his abdominal muscles because he believed that the body is "the biggest target and the least mobile. The more muscles you have around your abdomen, the more blows it can take." Bruce's body was covered with ripples of muscles. Broad-shouldered and narrow-waisted, he was the envy of even bodybuilders.

To Bruce, training was a full-time job. Even while watching television, he would be in motion. He would do his sit-ups very slowly, his body descending slower than ascending. "You'll get more benefit by doing them slowly," he said. "It's not the number of repetitions, but the way it's done."

When he wasn't doing sit-ups, he would be squeezing a rubber ball or pumping a pair of dumbbells. Desiring accolades, many times he would ask a friend or acquaintance to place a hand on his abdomen or leg to "feel my stomach muscles" or "feel how hard my legs are."

Bruce wasn't particular about what he ate. He avoided cigarettes, wine and liquor, but never refused a cup of hot tea. He would eat anything: pork, chicken, fish, beef, vegetables. His favourite dishes were Chinese and Japanese. 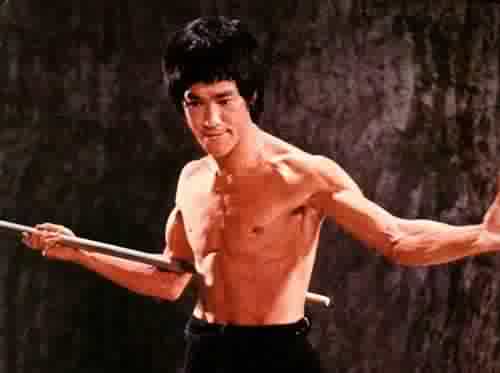 Although he was small man, 5-foot-7 and 135 pounds, he had a voracious appetite. In a restaurant, he always ordered an additional plate of food for himself- one serving was not enough. He also drank a lot of water, probably because he perspired so much.

Bruce took a daily amount of vitamin pills, apparently influenced by the body-building magazine he subscribed to. He prided himself on being healthy.